The general election illustrated that politician’s personal use of social media has undoubtedly increased over the last five years, but I question whether intricate, data-driven strategies were employed across all of the parties. I felt most of the parties only really scratched the surface of social media’s capabilities to really drive engagement and contribute to a significantly impactful campaign. It also got me thinking about the longer term efforts that these political parties could make in engaging the public on a day to day basis, in the times outside election campaigns. Politics doesn’t just matter to the electorate at election time, if parties are to break the apathy of voters, they need to make it relevant and highlight its impact on people’s lives on a daily basis.

Facebook’s automated “I’ve voted” service aside, the social media site was clogged full of political comment on Election Day and in the days after, with a range of comments, (some dubious/ill-formed) opinions and debates. 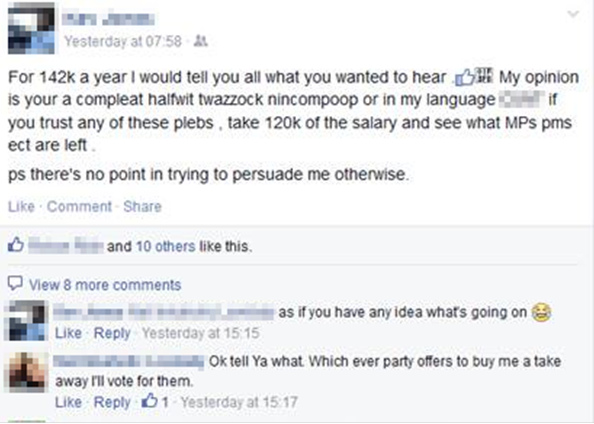 Particularly many people of my generation (24 to 30 year olds) and younger are becoming increasingly disenfranchised; they gripe that politicians sitting in their ‘ivory towers’ are so far removed from themselves and their concerns. Many worry that the parties are ‘the same shade of grey’ and that these parties don’t hold any significance for them, the ‘normal’ folk.

I wonder whether, in the age of instant gratification, especially amongst millennials needing to have their needs immediately met, whether the political parties need to, or should, tailor their campaigns to engage with this segment. From ordering a takeaway/taxi/clothes in a few swipes of an app, this growing trend has a name; ‘Tinderisation’ (named in homage of the social dating app Tinder where users swipe right to ‘match’ with a prospective date). User’s attention spans are shrinking, as is the likelihood that they  are going to actively seek out and read each party’s manifesto or literature so they can make an informed decision and actually turn up to vote. Instead, their opinion could be formed from social conversations, or on what they may watch on the web or read on their social media accounts in the run up to voting day.  Given the increased focus from the media on political debates, it would seem that influencing floating voters’ opinions in this way is going to grow in importance. And given the number of ‘Shy Tories’ and increased amounts of tactical voting (allegedly) in this election, if reform does not take place before the next General Election, influencing voters in this manner and using all channels to reach people while they make their minds up will prove crucial to success.

Both political parties and brands are guilty of providing cyclical marketing; major campaigns for a defined period of time followed by a lull in brand activity rather than an on-going strategy to really deliver value for their target audience. I think political parties are especially guilty of only really attempting to engage and ultimately influence voters, during (and in the run-up) to an election campaign. I also think the parties that make an impact in the 2020 election are the ones that begin their journey of voter engagement now, deepening the relationship with their target audience. Yes, major caveats include the defined campaign period to canvass voters, budget and resource, but a strategically managed on-going campaign with clear goals (importantly not for an election aimed at ‘winning’ votes specifically, but to  build ‘brand’ or rather political affinity) and with an emphasis on social media would, I believe, deliver far more value. It would also be far more effective in the political parties ROI (ultimately this, long-term, equates to votes).

1. Personalisation for the People

Recognition is the bed rock of delivering personalised messaging. Without understanding who people are and being able to recognise them across multiple channels and devices, communications will always be broadly targeted rather than tailored to an individual.

Parties should identify who they want to communicate with, what makes them tick and then build audience personas of these people. While some parties already target ‘swing voters’ in marginal seats, they should go further, employing statistical modelling on a wider basis to understand those with an increased propensity to be a future voter/supporter of a particular political party. Insights are crucial, as once these customers are recognised, the next step is engagement across the platforms best suited to them, and at the most relevant touchpoints serving the content that will most affect which box they mark on polling day.

All this relies on an undercurrent of data knowing how and when to use that data and insight is critical and parties should seek out organisations with a proven track record of demonstrable success in harnessing data to better serve their audiences. Ultimately data connectivity is crucial.

2. Engagement for the Apathetic

‘The Internet’ reacted to the election results, providing a barrage of GIFs, videos and memes all with the potential to go viral, which some of these did. Political parties should explore uses of social networks of rising popularity. For example, they could employ Snapchat to combine video used with creative purpose to engage political voters. They should take lessons from brands to evoke emotional responses from the public in an attempt to build party affinity. Social may be seen incorrectly in some corners as lightweight little fluffy by some, a view that’s increasingly becoming outdated as social spend increases month on month and ROI proof and social value to becomes more tangible. It needs to be taken seriously.

One aspect I enjoyed in this campaign was the various surveys available on social media. Voters could rate their feelings against a variety of issues and then the survey would supply them with the party that matched best with their ideals. Political parties should explore these types of approaches, making their policies more broadly available, packaged differently. The key here is a call and response approach – if you’re going to speak out on social, be prepared for the feedback and to back up your claims or tailor your approach accordingly. The electorate are used now to sharing their views democratically via gov.org petitions – this should be reflected come election time.

Using the multitude of social listening tools out there, political parties should be able to engage via social channels, surprising and delighting the public as their comments are responded to, shared, and engaged with.

All too often technical brands are too product focused, they position their marketing around in-depth product specifications, but all the end user really cares about it is how it can make their lives easier, the same rules should apply to political parties. Political parties should avoid the jargon and apply the ‘so-what’ factor to their communications, in order to deliver stronger connections. It’s clear from this election that things are likely to change in the future but this election proved that it may be the most influential election in changing how campaigns are run and monitored in the future.