To say that customers’ attitudes to data are contrary is like saying that piranhas can get a little bit upset. Copious research has been done on the subject and the one common thread is that consumers are quite comfortable holding two completely opposing ideas simultaneously.

On the one hand, consumers are adamant that marketing must be relevant, targeted and timely. On the other, there is very little chance they can be convinced to part with the data that will make this possible unless they receive several assurances, preferably signed in the blood of the CMO.

Mediabrands Marketing Sciences, for example, found that only 1% of consumers trusted advertisers to look after their customer data, but 27% would be prepared to sell their data and of those, 41% believed their data was worth more than £500 per year.

The research has also revealed that consumers are increasingly wary of ‘stalker’ media:

However, consumers say they are interested in receiving advertising messages based on their location data:

According to separate research carried out by Econsultancy in association with Acxiom, 40% of consumers surveyed stated that there was little or no benefit to them in sharing their personal customer data. It was ‘sometimes’ worthwhile for 43% and ‘usually’ worthwhile for a further 14%.

Figure 1: Do you generally feel that it’s worthwhile sharing your personal information for what you get in return?

The same research showed that a little under half of respondents (48%) only had a certain amount of trust in companies’ use of their data, with the other half evenly split over ‘quite strongly’ trusting organisations or not trusting them at all. Ambivalence was the order of the day.

Figure 2: How much trust do you typically have in companies when you provide your personal information? 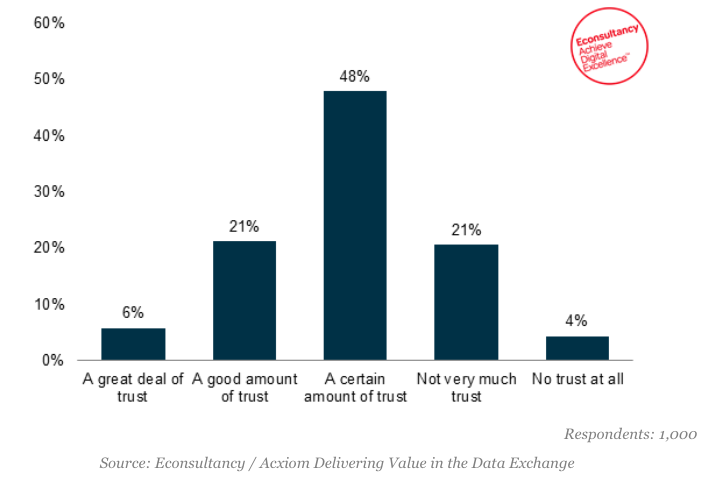 Ambivalence aside, consumer feeling was strong that companies should a) only ask for their information once and b) know who they were when they contacted the company after providing that information (see chart overleaf). The desire for a value exchange in customer service terms was already clear.

Figure 3: To what extent do you expect the following as a result of providing personal information? 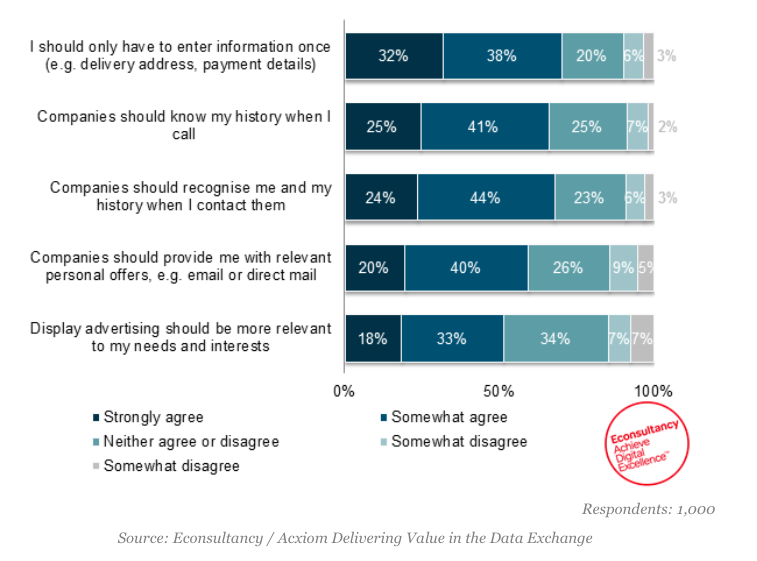 In June 2015 these findings were updated in a survey conducted by Acxiom in conjunction with the Direct Marketing Association (DMA). Essentially, the research ratified the findings of the previous survey. Despite the concerns noted above still looming large, there is a creeping acceptance of the data quid pro quo:

The survey also revealed that trust remained the most important consideration for consumers, with 39% citing it.

This is in contrast with those citing it was important to receive tangible value (as opposed to the intangible improved customer experience) – only 10% of respondents stated they wanted free products in exchange for data and 6% wanted to pay a lower price for a higher-value good. The £500 value of data cited by 41% of Mediabrands’ respondents seems some way off.

Regardless of a customer’s stance on data sharing, it’s the responsibility of organisations to respect the data they gather. Trust, transparency, recognition and relevance are key to maintaining good customer service relationships, and creating positive customer attitudes toward sharing data.