At this time of fragmented technology, exponential data growth and GDPR, how are consumer perspectives toward data evolving? To find out, Acxiom is proud to have partnered with the DMA for the second time, on the third iteration of the Foresight Factory’s independent research into ‘Data privacy: What the consumer really thinks”.

So, what are consumer and societal attitudes toward data and data privacy in the UK?

In 2012 and 2015, (and as we’ve previously outlined) the DMA/Foresight Factory constructed a segmentation analysis that categorises consumers according to their attitudes toward privacy and data exchange. It has been determined that consumers are either:

Looking at these three segments to determine how consumer data attitudes are evolving, as of 2018, it seems that those consumers who are ‘Unconcerned’ are on the rise. Equally the percentage of ‘Data Fundamentalists’ has dropped, while the number of people who are ‘Data Pragmatists’ has remained fairly static across half of the population, although there has been a slight decline since 2015.

Why might this be? With a maturing data economy and a more data literate public, it is clear that a greater percentage of UK society now understand more of the benefits and motivations behind transparent compliant data exchange. However it may be somewhat surprising that there is not a notable increase in the number of people seeking clear personal benefits in exchange for personal information; perhaps indicative of challenges that the data industry is facing with regard to demonstrating or communicating value exchange to consumers within the current data economy (increasingly key as we approach GDPR). 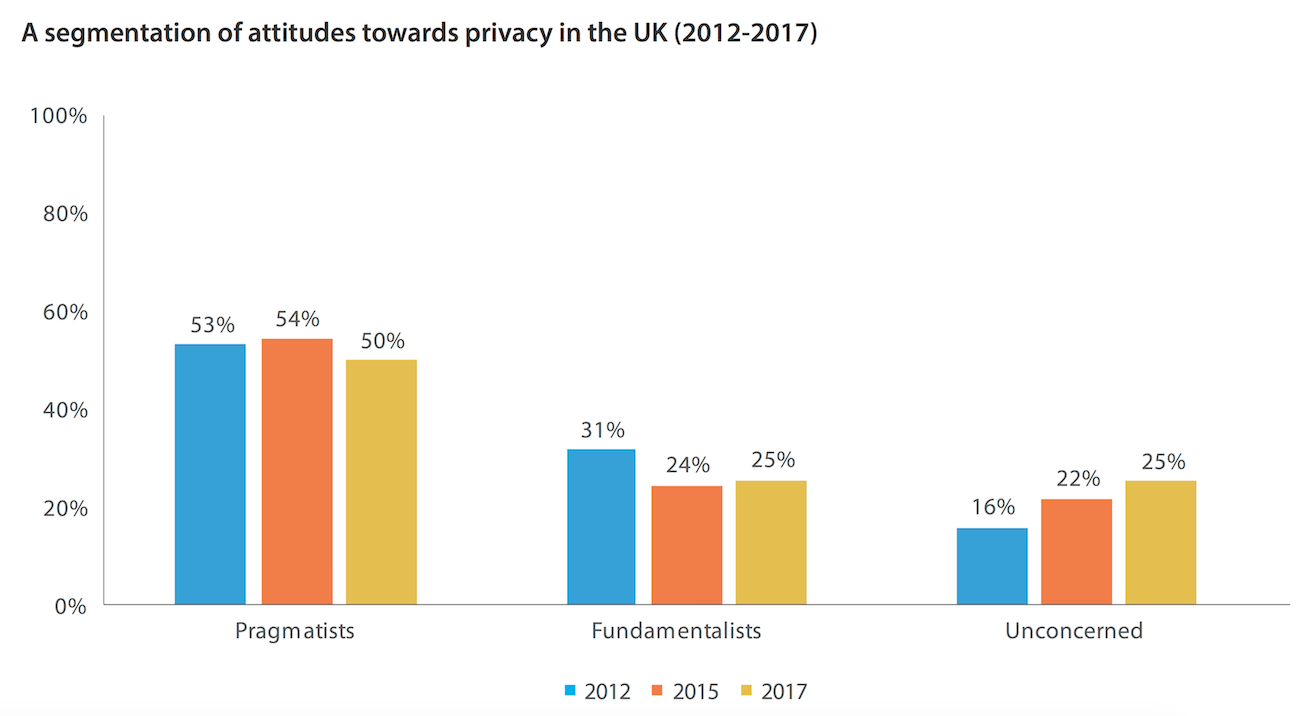 Overall, such findings (particularly as we see that 75% of the UK public show no fundamental or ideological objection to the sharing of their personal data), suggest fertile ground for a healthy, sustainable and mutually beneficial data eco-system in the UK.

Other data privacy trends seen in the report include:

Consumers are increasingly happy with the amount of information they share

There is continued growth in awareness and understanding towards the role of data exchange in modern societies. It is now just over half (51%) of people in the UK who believe the exchange of personal information is essential for the smooth running of modern societies, up from just 38% in 2012. Moreover, at 61%, it is now a strong majority of 18-24 year-olds who view data exchange as vital to modern society.

A significant majority of UK society continues to view the sharing of personal data as part of the modern economy. A total of 69% hold this view in 2017, although this has fallen slightly from 72% in 2015.

Alongside the growing acceptance of the role and value of data exchange in modern society, we also note a majority of people in the UK continue to claim to be more aware of how their data is used and collected than in the past; 67% agreed with this statement in 2017.

Ultimately, we are starting to see an increase in pace in societal acceptance and awareness of the use and role of data in modern societies. Concerns toward online privacy have fallen, and appreciation is growing toward the role that data sharing plays.

Yet, with still only half of the UK public indicating that they are comfortable with exchanging personal data with the industry, there is still some way to go. Encouraging this with greater transparency and positive engagement is something that the upcoming GDPR should help to achieve.